Home   »   Amazing Encounter with Horned Guans Mating in the Wild

Amazing Encounter with Horned Guans Mating in the Wild 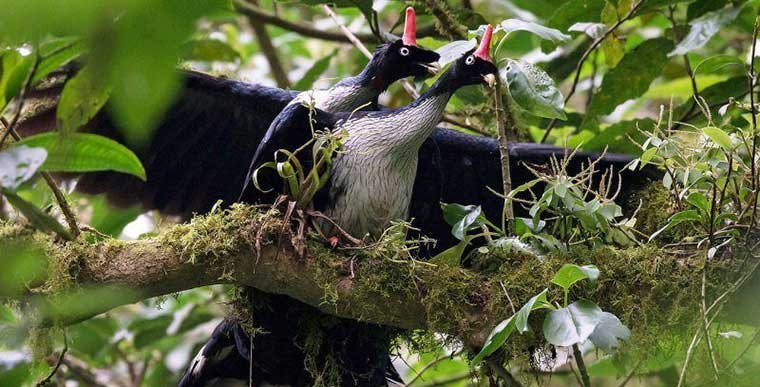 The amateur photographer was on his first trip to Chiapas’ Sierra Madre earlier this year when he documented the endangered birds’ behavior.

Apolinar Basora never thought he would get so lucky. He was on his first birdwatching trip to El Triunfo, a biosphere reserve in the southern Mexican state of Chiapas, and his group was looking for an entirely different bird. But then they saw it: a Horned Guan, an IUCN endangered bird with a possible population of only 600 individuals, according to BirdLife International.

Just seeing one guan, a turkey-like bird with a red horn on top of its head, would be enough to make any birder’s trip, but Basora’s luck didn’t stop there. He and another birder actually got to see two guans—a male and a female—and watch them consummate. On top of that, he managed to snap the only known photograph of two Horned Guans mating in the wild.

The trip, which took place this past March, was organized by the Mexican Community of Nature Photographers with the intention of finding another rare bird, the Resplendent Quetzal. Basora, a 42-year-old information technology specialist, has been a member of the group for about five years and travels with them all over Mexico looking for new birds and landscapes. “I’m a big enthusiast of nature photography,” he says.

The sighting and photograph didn’t come without work. The journey to El Triunfo is long and exhausting. From Mexico City, you first must fly to the southern city of Tuxtla Gutierrez. Then, you take a seven-hour trek in a 4×4 vehicle into Chiapas’ Sierra Madre, a mountain range that goes through Honduras, El Salvador, Guatemala, and Mexico. From there, Basora and his group hiked for five hours with a mule carrying their equipment just to reach base camp.

“The next morning, we woke up ready to go,” he says, excited to relive his story. The trip’s party totaled 14 people, and that day they had planned to form smaller groups and scatter in different directions to cover more territory. In Basora’s group of four was Luis Felipe Lizama, an experienced birder who had been to El Triunfo before and was familiar with the area’s rare birds.

The group’s first walk of the day started early in the morning but proved fruitless. They returned to the camp, had lunch and some rest, and went out again at around 2:00 p.m. After having walked only one mile, Basora’s says they stumbled upon the first Horned Guan perched on a branch about 100 feet off the ground.

“We later realized it was the male,” he says. ”He was singing so loudly. So we stopped and photographed it.

After a few minutes, Basora and Lezama decided to go deeper into the woods to try to find a better angle. On their way back to meet with the rest of the group, they saw the female. She was sitting low in a tree and singing the guan’s distinct song, one that Basora describes as “an old Nokia cellphone ringing on vibration mode.”

Stunned by their good fortune, the two stopped to watch the female. And then, a few seconds later, they heard wingbeats: The male they had seen earlier had found the female. “I was in awe,” Basora says. “But Luis Felipe immediately told me: ‘I think they are going to mate. Get ready.’”

Regretting not bringing his tripod, Basora readied his Nikon D610 equipped with a 200-500mm lens. “The mating only took about eight seconds,” he says. “I was shooting at a fast speed, but it was so dark there that at some points I wasn’t sure of what I was doing.”

Lezama also tried to photograph the moment. He had a tripod and a much more powerful zoom lens, but he could not get a clear image. “The whole time I just heard him whispering: ‘I can’t focus . . . You have to make this shot,’” Basora says.

Back at camp, they eagerly checked Basora’s pictures to see if he captured the rare moment. He did. “None of us could believe it,” he says.

And neither could Fernando González, an ornithologist at the National Institute of Ecology of Mexico. González has spent the last 25 years studying Horned Guan populations in Mexico and is currently working on a population monitoring project. This bird is so rare that his calculations show there are less than five per square mile in Chiapas tropical forests.

“I have never seen a picture like this in my life,” González says. “It has tremendous scientific value, because even though we have extensively described how Guans mate, we can now show it. Apolinar did a great job.”

Basora also documented the post-coital ritual of the birds, giving scientists another important record. “After mating, the male picks up bromeliads fruits, a plant of the same family of pineapples, and feeds the female,” González says.

Basora’s story might be as rare as the bird he photographed, but he has a message for other birders out there: “Don’t quit. If you go somewhere and don’t see anything, go back, insist.”

The best part of this whole tale, though? The day Basora took the picture was also his birthday, March 20th. A lucky guy, indeed. 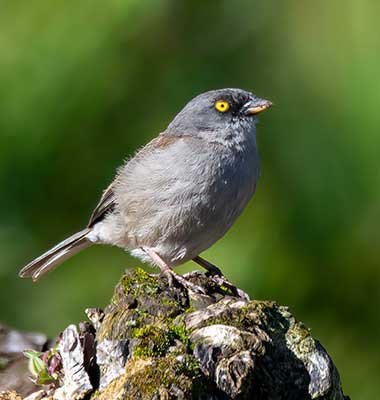